Our booth at the Ellenville Blueberry Festival - 08/13/22 - 9AM to 4PM.  Almighty God blessed us with a beautiful day and a busy street in Ellenville, NY.  Thanks be to God. 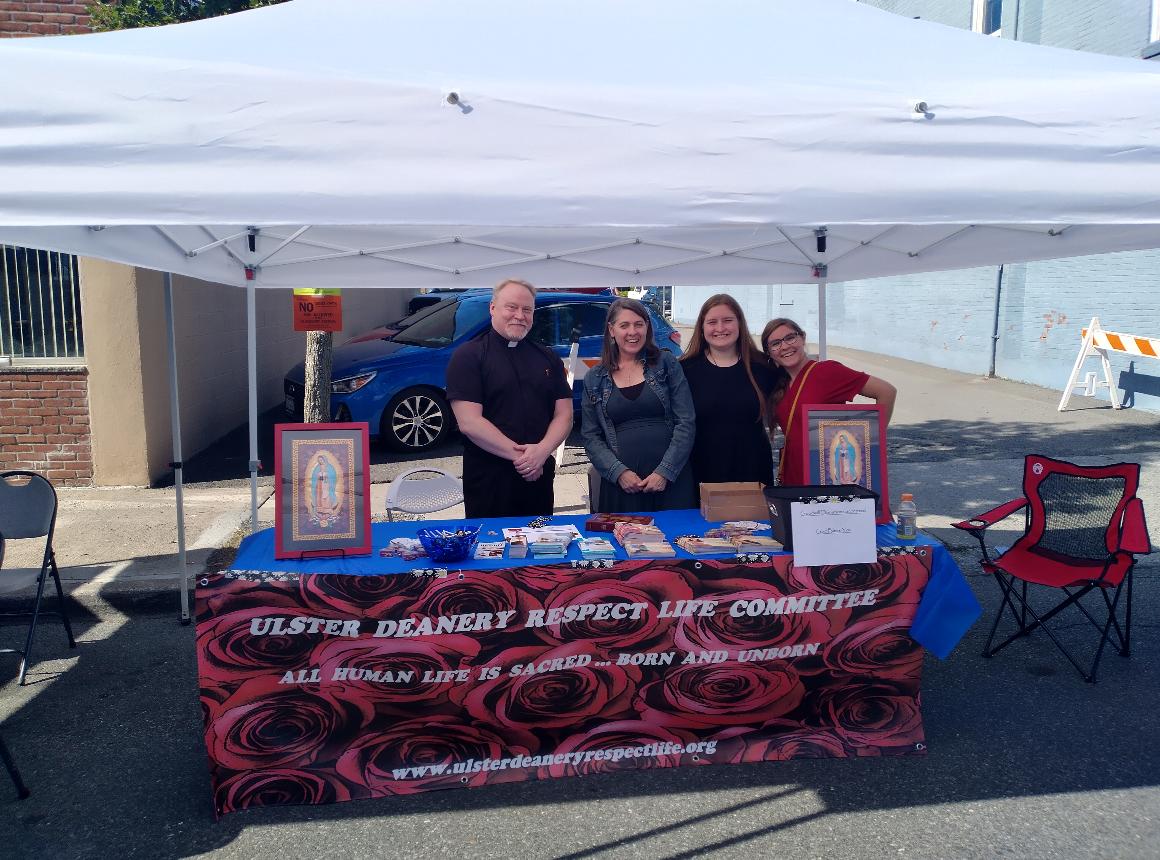 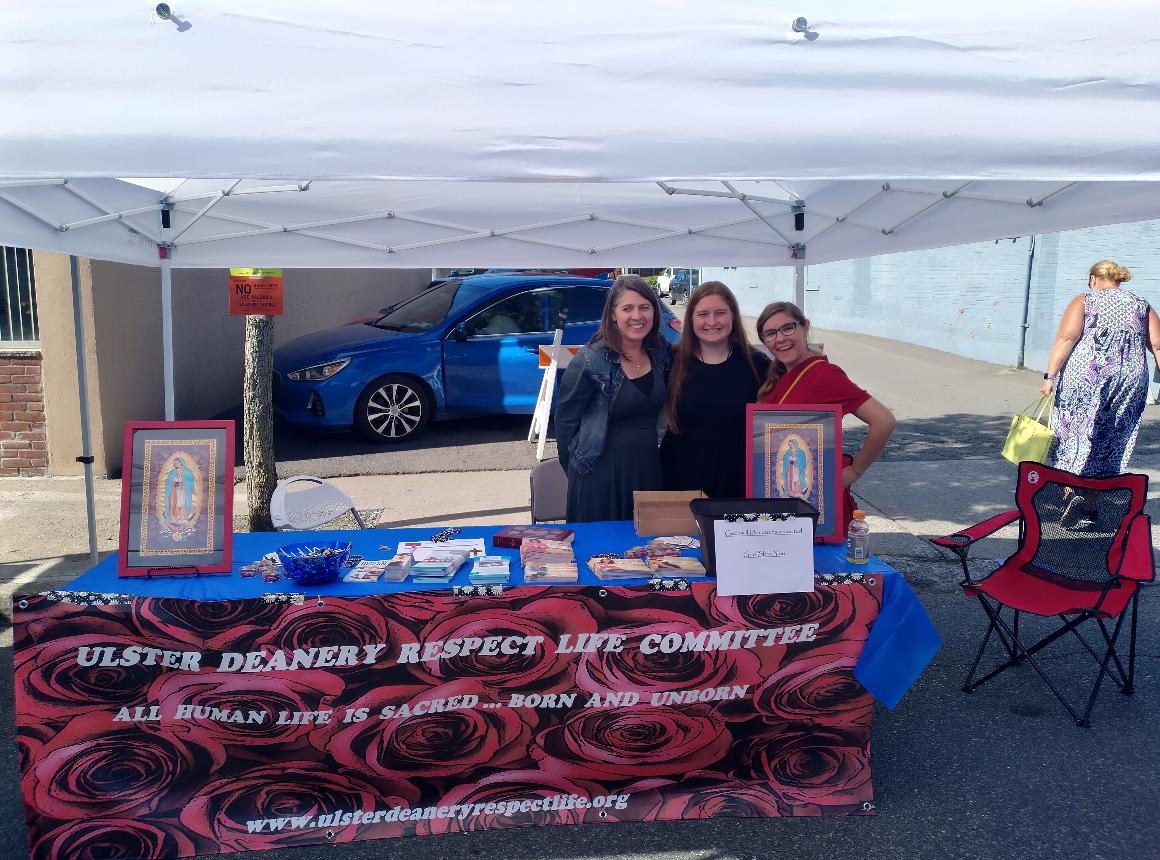 * Below is a link of the article on the Ulster Deanery Respect Life Committee and the billboard incident on page 22 of the latest issue of “Catholic New York”.*

* Below is a link to an article on the billboard incident in the Kingston Daily Freeman.*

With new hope we pray and persevere for the Pro-Life cause in New York State and Ulster County. We welcome the cooperation of all people of good will.

Happy Feast Day of The Sacred Heart of Jesus.

Heroes of the month:

·     Justice Samuel Alito declared: “Roe was egregiously wrong from the start. Its reasoning was exceptionally weak, and the decision has had damaging consequences. It is time to heed the Constitution and return the issue of abortion to the peoples elected representatives.”

·     Governor Doug Ducey of Arizona called on the legislature to reform funding of schools by passing a universal school choice funding bill because Catholic families attending Catholic schools pay for education twice, once in taxes and once in tuition. It is the first state in the union to do so.

·     Bishop Robert J. McManus of Worcester for challenging the Jesuit Nativity School of Worcester for displaying a Black Lives Matter flag despite the stated goal to “disrupt the nuclear family structure” and support of the LGBQT movement which is dramatically opposed the the Church teaching on human sexuality. The mass and sacraments are no longer permitted on the school grounds.

Zeroes of the month:

·     President Biden smeared the Supreme Court for their “outrageous behavior” which he called “destabilizing.”

·     Justice Sonia Sotomayor joined the dissent opinion which read: “From the moment of fertilization, a woman has no rights to speak of. A state can force her to bring a pregnancy to term, even at the steepest personal and familial costs.” The justice also believes a school coach should have no right to voluntary prayer in public.

·     Speaker Nancy Pelosi’s relentless advocacy for abortion caused San Francisco Archbishop Cordileone to ban her from communion. In Rome, she defied the archbishops direct order receiving Holy Communion at a Mass with the Pope showing no respect for the teachings and shepherds of the Church.

A pro-life billboard leased by the Ulster Deanery Respect Life Committee was damaged by vandals in Esopus overnight on June 20-21. The Ulster County Sheriff’s Department is investigating. This was not the first incident in Ulster County as the Bravo center, a pregnancy support center in Kingston, was vandalized weeks earlier.

·     The U.S. Department of Health and Human Services has created a new website, ReproductiveRights.gov, aimed at directing Americans to abortion and contraception, including minors. It also says the abortion pill is safe and available to be mailed to their homes. The Biden Administration has made it easier for young girls to access abortion and for predators to find abortion options for their victims.

·     Senator Elizabeth warren(D-Mass.) along with fellow pro-abortion senators, introduced legislation last week attacking pro-life pregnancy resource centers that have been helping pregnant women with life affirming options for decades – for free. In a tweet, she noted, “With Roe gone, it’s more important than ever to crack down on so-called ‘crisis pregnancy centers’ that mislead and deceive patients seeking abortion care.” The centers tell women about fetal development, abortion procedures and risks, and offer free ultrasounds and material help.

During an Extraordinary Session of the State Legislature, the senator and colleagues took action to pass the Equal Rights Amendment (ERA) which begins the process of enshrining the right to an abortion, contraception, and personal autonomy over healthcare decisions in the NYS Constitution. The Senator and colleagues also passed a package of legislation to protect abortion rights including her bill S.9080B, to protect abortion providers from responsibility if they provide abortions for patients from anti-abortion states.

U.S. representative Bob Good (R-Va-5) has introduced a discharge petition to force Speaker Pelosi to allow a vote on The Life at Conception Act ahead of the 2022 midterms. If passed, recognizing the scientific fact that life begins at the moment of conception, the act would end abortion-on-demand in America providing stiff penalties for abortionists. The Congress would need 218 House Members to sign House Resolution 1167 – the Discharge Petition to bill H.R. 1011, the Life at Conception Act.

President Biden has vowed to see Roe codified into law and appoint pro-abortion judges throughout the country to keep abortion protected. The President has also issued an executive order in response to the Supreme Court decision to overturn Roe v. Wade. It Includes:

House speaker Nancy Pelosi is calling for abortion-on-demand to be codified into federal law. She has said “It is essential that we protect and expand our pro-choice Majorities in the House and Senate in November so that we can eliminate the filibuster.”

·     Senator Elizabeth Warren has described pregnancy resource centers as “fake clinics” and has introduced legislation to “crack down” on the alleged “misinformation” she accuses pregnancy centers of spreading. Here is why she is wrong:

Women who visit the emergency room for complications following a chemical abortion face increased risks if they are misdiagnosed as having had a natural miscarriage. The abortion industry is jeopardizing woman lives by encouraging women not to tell emergency doctors that they took the abortion pill, RU-486. Of the women with miscoded abortion pill complications admitted to hospitals, 86% needed surgery to remove remains of their dead children. Miscoded patients averaged more than three total hospital admissions over 30 days at a rate 78% higher than accurately coded admissions. Recent media coverage claiming that a natural miscarriage and an induced abortion are the same thing amount to encouraging medical malpractice according to Dr. Ingrid Skop, Director of Medical Affairs at the Charlotte Lozier Institute. Complications may include, nausea, vomiting, diarrhea, a higher risk of infection including sepsis, hemorrhage, damage to the uterus, auto-immune disease, blood clots, and complications in future pregnancies.

The House of Representatives passed the Ensuring Access to Abortion Act, which would ban states from criminalizing those who travel out of state for an abortion. The House also passed the Women’s Health Protection Act, but neither is on track to pass the Senate.

Our tax dollars help finance Planned Parenthood. Every year Planned Parenthood receives about $528 million in federal funding which covers about 40% of its budget. PP aborted 327,653 babies in one year according to its annual budget. That’s 27,304 per month, 910 per day, 37 per hour. A new video from the Center for Medical Progress (CMP) contradicts past claims from PP that the corporation never participated in the sale of aborted body parts but merely donated them and was compensated for expenses.

New York is well known as “the abortion capital of America.”

·     In 2019 the NY legislature passed the radical “Reproductive Health Act” that removed all statutory limits on abortion.

·     The Governor has allocated $10 million to abortion clinics supposedly for security with another $15 million to follow. She has declared NY a “safe haven” for abortion.

·     Currently Progressives have put forth a proposed amendment to the state constitution called the “Equality Amendment.” It gives maximum constitutional protection to abortion. It adds “sex including pregnancy and pregnancy outcomes” to the list of specially protected categories in the civil rights guarantee of the NY state constitution. This would be treated as a “fundamental right “categorizing it as close to impossible to regulate or restrict. It would apply to “any entity acting in concert with or on behalf of the government – like religious schools, hospitals, or charitable agencies. Neither the state nor federal constitution offers sufficient religious freedom protections for those who object to abortion.

Theologian and philosopher Marcel Guarnizo addressed the pro-life’s movements confusion over the Dobbs v. Jackson Woman’s Health Organization Supreme Court decision overturning Roe v. Wade. It is clearly good news and a sign of progress. It did not confer the right to life for pre-born human beings, nor did it halt persons in power from arbitrarily deciding who lives and dies.

Dobbs did not confer the right to life upon the preborn. The Court did not confirm that a right to life exists or that the child in the womb has equal rights to any of us after birth. The Court decision repeatedly stated the authority to regulate abortion is returned to the people and their elected representatives.

Virginias Republican Attorney General and sixteen others threatened legal action against Google if the Big Tech company censors pro-life pregnancy resource centers on its search engine at the urging of government officials.

The growth of Catholic hospital systems impact services. The differing perspectives on these services can clash when a Catholic hospital system seeks to acquire or merge with a non-sectarian hospital. In states where abortion will remain legal, pro-choice advocates concerns include contraception, sterilization, and certain procedures for handling pregnancy emergencies. These services, along with abortion are forbidden under The Ethical and Religious Directives set by the U.S. Conference of Catholic Bishops.

At the University of Michigan, dozens of medical students walked out of the school’s White Coat Ceremony protesting pro-life Dr. Kristin Collier, director of the schools Health, Spirituality, and Religion program who is “enormously popular” with patient ratings. The speech did not mention abortion. At The Hill, Jonathan Turley writes that what happened to Dr. Collier is part of a larger trend of abortion supporters silencing pro-life advocates to avoid looking more closely at the issue. “It is not enough to be pro-choice,” he writes. “Now you must be anti-pro-life.” The First Amendment may be bypassed because there is some larger social obligation to silence people with pro-life views.

The Biden Administration proposed a new rule that revises section 1557 of The Affordable Care Act to add “sexual orientation and gender identity” and “reproductive health care services” including “pregnancy termination” to existing “protections against discrimination on the basis of sex.”

WE CAN STAY INFORMED AND REACT TO SPECIFIC LEGISLATION